The Origins of Anansi

The Origin of Anansi the Spider is inspired by an African fable from the Ashanti people of Ghana. Anansi the spider who often appears as a human being with a spider body or just as a spider, is honoured as one of the world’s best known folklore characters.

He is what Africans call a “trickster,” a cunning character with unmeasurable wit and wisdom.

Anansi stories traveled from Ghana to the Caribbean during the slave trade, and then to the Americas. Anansi was a strong folklore character that the slaves looked up-to because of his ability to outwit the slave Master and win his freedom. 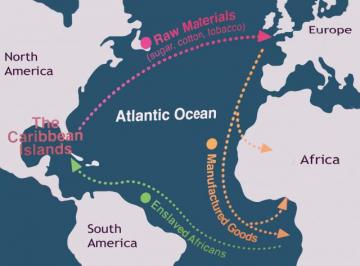 The picture above highlights the route taken for the triangular trade; however,  what is the Triangular Trade?

The ‘Triangular Trade’  was name based on the shape that was created by the sailing route taken by British slave traders. This was from Europe to Africa, Africa to the Americas and from the Americas to Europe again.

It was a journey of three stages:

How to Use the Site

Pay Us With Paypal